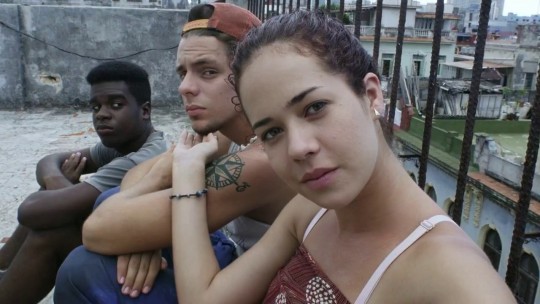 Together with ESN-Rotterdam, we invite you to our monthly film night. This time we will screen a film from Cuba to start of Spanish Film Festival of Latin America.

In cooperation with ESHCC and the IBCoM programme, the students of Media in Latin America Class will introduce the first movie of a film festival organized as a closing project for their course. In the following days, they will take Latin American Films to different venues in the city, discussing the choices that Latin American directors make when depicting they region and how they differ from choices and representations seen in mainstream media.

Tonight’s film El Techo/ On the Roof
Cuba is known for its great beaches, rum, and Che Guevara (who is not even Cuban). El Techo has none of that, which makes it great due to its difference. You will meet Yasmani, Vito and Anita, a group of friends who hang out on a Havana rooftop. Follow them on their everyday adventures while they are dreaming of a future and trying to deal with the present. In this romantic and dramatic comedy, the strong friendship, hard-work, occasional disagreements, boundless laughter, hope, and pizza business, create their own world amidst the obstacles present in Cuba.

Join their laughter, difficulties, and quest for a better life. What will Yasmani do with the pigeon business? Who is the father of Anita’s baby? Will Vito ever reconnect with his Italian roots? The answers to these questions, and more, will be discovered along with the authentic Caribbean warmth and sazón from Cuba.