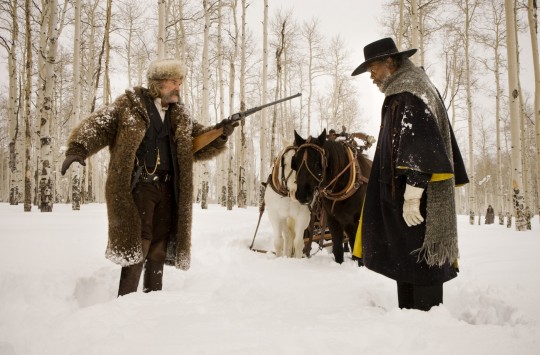 Together with ESN-Rotterdam, we invite you to our monthly film night. This time we will screen Tarantino’s masterpiece The Hateful Eight. Ennio Morricone (known for a lot of legendary film soundtracks) won his first ever Oscar for the soundtrack of this film.

Some time after the Civil War, a stagecoach hurtles through the wintry Wyoming landscape. Bounty hunter John Ruth and his fugitive captive Daisy Domergue race towards the town of Red Rock, where Ruth will bring Daisy to justice. Along the road, they encounter Major Marquis Warren (an infamous bounty hunter) and Chris Mannix (a man who claims to be Red Rock’s new sheriff). Lost in a blizzard, the bunch seeks refuge at Minnie’s Haberdashery. When they arrive they are greeted by unfamiliar faces: Bob, who claims to be taking care of the place while Minnie is gone; Oswaldo Mobray, the hangman of Red Rock; Joe Gage, a cow puncher; and confederate general Sanford Smithers. As the storm overtakes the mountainside, the eight travelers come to learn that they might not make it to Red Rock after all…