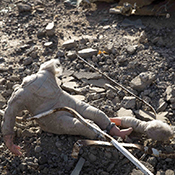 Sectarian violence in the Middle East

Monastries, shrines, and people are ritually destroyed in conflicts in the Middle East. Both IS and its adversaries partake in these acts of symbolic violence. Rather than categorizing them as sectarian destruction, Prof. Dick Douwes (ESHCC) dares us to keep our eyes open and to understand the cultural, historical and political stakes in sectarian thought and action. Reservations recommended.

What is sectarianism? Does it help us understand symbolic violence? Present-day tensions and violence in the Middle East are often defined as being sectarian. Moreover, several parties that are involved in warfare in Syria, Iraq, Yemen and elsewhere have embraced a sectarian discourse and perform sectarianism through violent–at times severely cruel–symbolic action.

The most obvious example is the Islamic State (IS). Engaged in a seemingly apocalyptic battle, based upon a radical reading of the religious past and present, IS’s sectarianism legitimates the killing of ‘unbelievers’, the degradation of women to slavery, the destruction of shrines, churches, monasteries, etc.. But sectarian reasoning and action are not the prerogative of IS and other Jihadist movements. Their adversaries too, including various regimes in the region, invoke images from an imaginary past in their slogans. And they too, in addition lethal military violence, use symbolic violence similar to that used by IS, such as desecrating and destroying what is held sacred by the other, including the killing of religious leaders as exemplified by the execution of a leading Shiite scholar in Saudi Arabia in December 2015.

But what is sectarianism? Is it a useful concept in understanding present-day violence? Some argue that sectarianism as such helps to explain current conditions in the Middle East to a considerable degree and some even portray the various religious communities as being historically locked into a condition of animosity and conflict. However, the mere fact that religiously diverse societies such as those in the Middle East still exist today, undermines the assumption that a historical common ground is what is lacking.