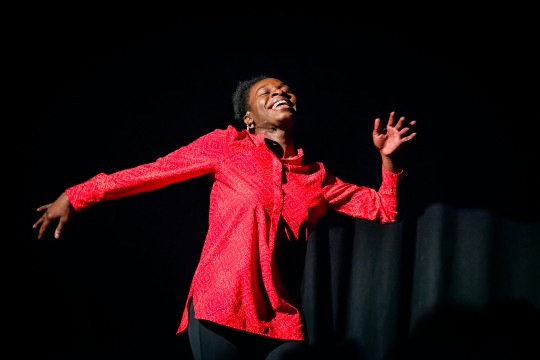 Woke is a theatre performance by Apphia Campbell about the Civil Rights Movement. Performance and after talk in the context of International Women’s Day.

Don’t miss this award-winning theatre performance by Apphia Campbell that follows two women’s fight for civil rights. One is notorious Black Panther, Assata Shakur wrongly convicted of murder in the late seventies; the other, a present-day university student, Ambrosia, enrolling as the Ferguson riots begin (2014). This is when the Black Lives Matter movement became nationally recognised following the death of youngster Michael Brown in Ferguson.

Set against a powerful soundtrack of original music and traditional gospel and blues sung live, the two women challenge the American justice system, become criminalised through political activism, and ultimately are faced with the same choice: stay and fight, or flee?

Woke won the coveted Scotsman Fringe First Award for its premiere season, and was highly commended by the judges of the Amnesty Freedom of Expression Award. (2017)

After the play, we’ll have an interactive discussion about the issues of the play. Feel free to speak your mind!

Theater performance: Woke, by Apphia Campbell and Meredith Yarbrough
After talk: by Aiesec and the audience

Studium Generale in cooperation with Aiesec